A couple of weekends ago I was at the Latitude festival and happened on a rather good talk by Sunday Times journalist Andrew Smith. The talk was a cross-legged affair, in a shed, in the woods and was about the inventor of Bitcoin, Satoshi Nakamoto. Nakamoto, it turns out, is a bit of mystery. He, if indeed it is a ‘he’ solved a mathematical cryptographic problem that the rest of the world couldn’t, as a necessary condition for inventing a peer-to-peer currency. The neat thing about a peer-to-peer currency is that it doesn’t need a central repository to guarantee its value. That’s bad news for governments and banks everywhere if it becomes mainstream, and potentially destabilising/energising for national economies.

But Nakamoto has disappeared. After introducing the currency, and impressing the pants off mathematicians everywhere, he dropped off the radar and hasn’t been seen since. A bit like Pierre de Fermat and his famous last theorem or Keyser Soze from The Usual Suspects. The ‘disappearing genius’ is a good, human-interest angle for journalists and Smith is now on something of a detective trail fueled by potential conspiracy at every turn. Part of that trail is in looking at the fragments that Nakamoto left behind and talking to the people that interacted with him online, another part is trying to figure out the characteristics of the person by looking at the qualities of the ‘thing’ he created. That second part is a bit like the so-called ‘argument from design’ – inferring the nature of God by looking at the world she created – a tenuous exercise at best, as David Hume showed in his Dialogues on Natural Religion, but a fun game all the same. 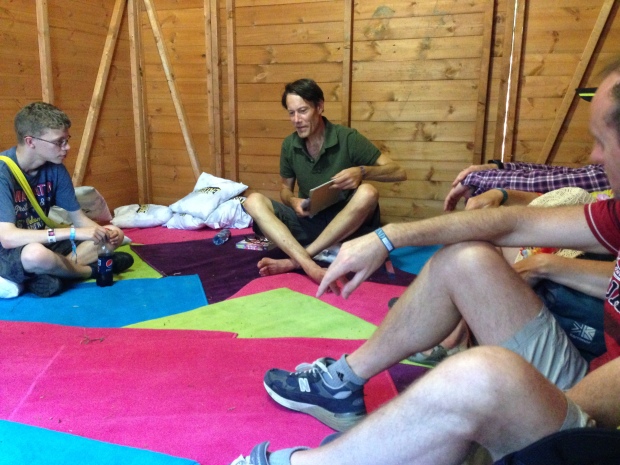 I’ve been following Bitcoin in the news for a while now, without ever really understanding what it is exactly, never having used it. The talk, however, brought home design aspects to the currency, and implications for its use, that I found intriguing. One comment that Smith reports Nakamoto as saying, on one of the discussion lists he was part of was that, in figuring out his currency:

“much more of the work was designing rather than coding.”

That’s an interesting comment to me. It sort of implies that there was a ‘hard’ problem to solve, followed by a lot of design problems: working out how Bitcoins could be ‘manufactured’, used, kept secure, and how they might capture the imagination of people.

For what it’s worth, here’s how I think Bitcoin works. A Bitcoin is basically a number, though not any old number. It’s a number worked out by a computational process that allows anyone to ‘mine’ Bitcoins. Early on in the currency it really was anyone (with a computer and the right software) that could mine Bitcoins, and many did. But Bitcoins are finite, like the total amount of gold in the world, so they get progressively harder to mine. The analogy that works for me is of prime numbers – numbers divisible only by 1 and themselves. The first few are easy to work out: 2, 3, 5, 7, 11, 13, 17, 19, 23, 29, 31, 37 but as you get higher and higher, the numbers get harder and harder to ‘mine’, to the extent that it is only since the invention of the computer that we’ve been able to ‘discover’ large prime numbers. The latest, discovered in April 2014 (Wikipedia is a wonderful thing), has 17,425,170 digits to it. And that’s the crux of it; to mine Bitcoins now, you need extensive computing power. There are server farms now set up in the cold half of the northern hemisphere with the sole purpose of mining Bitcoins. That’s a lot of energy, but then mining for gold takes a lot of energy too.

So basically you get a number when you mine a Bitcoin and when you exchange your Bitcoin for goods, services, or other currency there is a process that checks both that you have a valid Bitcoin – in our analogy you really do have a prime number – and that you have not already spent your Bitcoin.

That may, or may not, be a good explanation but it’s about as far as I can go. If you want more detail I’d recommend you read Andrew’s book as a starting point. What I’m really interested in though are two things. First, the process of design leading to Bitcoin and second, the potential disruptive implications of Bitcoin. The two, of course, are linked through the enigma that is Satoshi Nakamoto.

What I like first is the use of gold as a metaphor for Bitcoin. Gold instantly tunes you in to the kind of currency you’re dealing with; one set up with olde world values. Gold coins, mining, ingots stored in safes, buried treasure, mediaeval tradesmen shaking out ducats from leather pouches. Gold fires the imagination; intuitively you seem to know what you’re dealing with – it gets its value, unlike pound notes or euros, from its scarcity. That must have taken some thinking out by Nakamoto, to keep that metaphor in mind while doing the serious coding.

The serious coding, the ‘hard’ problem mainly seems to have involved making Bitcoin hack-proof. All currency is based on trust and once that trust is breached you don’t have a currency any more. If false Bitcoins can be mined as valid Bitcoins then trust in the currency breaks down.  But Nakamoto appears to have covered the bases through the architecture of his software, having a central (and simple) core, which can deflect any potential attack to satellite components; a solution which has been acknowledged by mathematicians as an elegant one. I’ll spare you the details because, to be frank, I don’t know them. What I do know is that making Bitcoin secure involved imagining how possible threats might emerge, and what to do about them. That is, how does the product respond to misuse? A classic design problem.

Of course Bitcoin must also be efficient and easy to use – no point in waiting a week for a transaction to be confirmed. Again, Nakamoto must have imagined potential use scenarios at the point of exchange. How is validity checked? How long does it take the purchaser to know that they have a real Bitcoin? How easy is it to make an exchange even? These are all potential barriers to the take up of a new system, and design problems that Nakamoto systematically solved. Nakamoto looks more and more like a very good designer.

There is more to good design than just the design, though. Good design sets the mind thinking about new directions, consequences, and effects. A good design, like a character in a novel for an author, takes on a life of its own and is able to show the designer the possible implications of the thing as it relates to a broader vision of society. Bitcoin is more than just good code, it is a way of thinking about the fundamentals of what money is and does.

That is where the (potential) disruption comes in. We have got used to our pound notes, dollars, and euros. Money is regulated by central banks and managed for us by high street banks. The whole financial system pretty much runs on transaction charges. Like a casino – and the gaming analogy is apposite – the house always wins. And, as the recent financial crisis has shown, if a bank loses it still (almost always) wins – the government can provide a bail out, say ‘don’t do it again’, and print more money as a sticking plaster. Because money, in this form, and unlike gold, is, in theory if not in practice, infinite.

So, if you can create a stable financial system without banks, that would be a big thing; a way of reshaping the whole financial system and perhaps stopping the wealthy, at least those in finance, from getting wealthier. And all from a number. The interesting thing is that it’s not clear what politics Bitcoin has, though it appears to have come about with political aims. Smashing the system seems like good old socialism, while creating new financial models sounds like rampant capitalism. That seems like an indicator, to me, that it is a potential way forward, and if it is, it has been cleverly thought through.

Bitcoin, though, has not received a good press. Silkroad, a website for buying illicit goods – the Amazon of the dark side if you like – uses Bitcoin as its currency because (another key thing) it preserves the anonymity of the people carrying out transactions. As a result the exchange value of Bitcoin has fluctuated widely from almost nothing (bad press) to something huge (good press). But it abides, and therein lies the challenge to existing financial frameworks. While crypto-currencies like Bitcoin remain, a possible future also remains. So if anything, Bitcoin looks like material for a new architecture, although that architecture remains largely to be constructed. There are interesting applications emerging though. Transactions too small for transaction charges to be feasible, so-called micro-payments, is one area of potential growth; for small chunks of web content, for example. Emerging economies are another area of Bitcoin development, where currencies, banks, and financial services tend to already to be unstable.

You might think that such a fascinating subject would attract a reasonable crowd at a festival like Latitude. Well, see the photo above, I could have counted the audience on both hands.

Shirt + Jeans
Taking photos of the beach at #margate
A #gormley man looking out to see at #margate
It’s a #cliche I know but it had to be done. A paddleboard to the #WestPier as the sun goes down. Shortly after I tried going through the pier and got massively shat on by unwelcoming seagulls.

George Lakoff has retired as Distinguished Professor of Cognitive Science and Linguistics at the University of California at Berkeley. He is now Director of the Center for the Neural Mind & Society (cnms.berkeley.edu).

a critical archive of all designs of futureplaces since 2008

An independent study for the Arts and Humanities Research Council